India is the largest Brassware making country in the world. This art has been practiced in India over a thousand years. According to archeological records, brass was popular in India since the third century BC and most of the idols of gods and goddesses were made of this metal.

Moradabad, in the state of Uttar Pradesh is renowned for brass work and has carved a niche for itself in the handicraft industry throughout the world.

Established in 1600 by Murad, the son of the Mughal Emperor Shahjahan, Moradabad is also known as ‘Brass City’ or ‘Peetal Nagri’. It has about 850 export units and 25000 metal craft industrial units in its cluster. In the narrow by lanes of the city, artisans work all day to create the most exquisite brass products. Some of the artisans have their in-house manufacturing units and workshops, otherwise different tasks take place in different small manufacturing units.

These units consist of furnace, moulding tools, and polishing machine.

Brass work in Moradabad is a small-scale and low-technology industry, it bloomed in the early 19th century and British took the art to foreign markets. Other immigrating artisans from Banaras, Lucknow, Agra and many other places formed the current cluster of brassware industry in Moradabad. 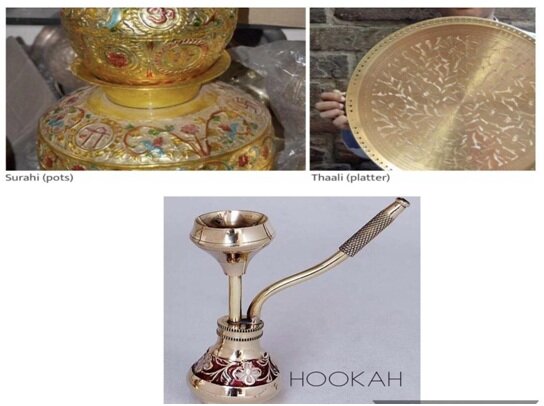 The inevitability of export promotion for the country, the Government of India has established an elaborate institutional structure for the same. Several organizations and commodity Boards specializing in selected commodities has been set up by the Government to augment exports from India. A series of organizations like State Brassware Corporations of India, Export Promotion Council/ Trade Fair Authority of India, Trade Development Authority, A H India Handicrafts Board, Handicrafts and Handloom Export Corporation of India, etc. have come up to assist the export promotions and to fetch the increasing foreign exchange resources for the accelerated pace of our economic development.

Brass metal is an alloy of copper and zinc and the quality of the metal depends on the Percentage composition of both these metals. Various processes involved in the manufacturing of brassware. The task of making brassware requires a team of skilled artisans having considerable expertise in various areas. For instance, a skilled engraver is needed for the task of engraving, a skilled enameller is needed for the task of enameling, similarly, many others are required for additional responsibilities. Moreover, this Traditional craft is probably five hundred years old and these artisans learned this traditional art form from their ancestors and forefathers engaged into this practice from many generations. 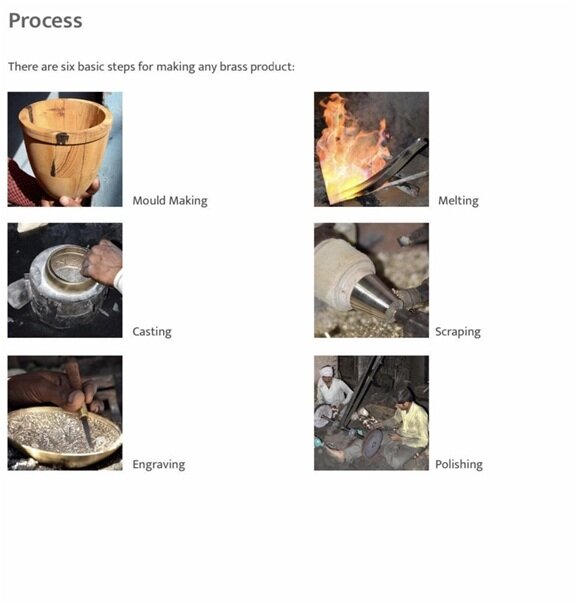 The Brassware industry has two major lines of production:

Stages for making a brassware are:

Mould Making- The first step is to make the mould or ‘master-piece’ from which multiple products would be replicated (cast). These are usually made of wax, as it is soft and easy to work with. Sometimes wood is also used. This master copy is always created in two (or more) detachable halves to make sand casting convenient.

Melting- Brass is prepared by melting scrap-metal to approximately coal-fired furnaces. The raw materials are a mix of many metals namely copper, zinc, lead, etc. in a specified ratio. A flux is also added to remove the impurities. These are molten in a huge container for about twelve hours to produce 350 kilograms of brass at one go. The molten metal is left to cool on basic iron molds to form strips that are then sent to the casting craftsmen.

Casting- Sand casting is the traditional method of making brass ware. Sand is used in the two halves of the mould box to cast the metal which is prepared by packing sand (locally called ‘masala’) around the ‘master copy’ tightly. The chemical binder in the sand aids in holding the shape of the mould after which it is removed, and molten metal poured in its cavity. After being allowed to cool for a few minutes, the cast metal is removed from the mould box. The sand and the ‘gating’ (pathway made in the mold for directing the flow of molten metal into the cavity) are broken from the cast using a hammer. These are re-used in the next casting.

Scraping- The cast metal is mounted on a cylindrical wooden block, which in turn is attached to the headstock of the lathe machine. Various chisels and files are used to scrap the spinning cast and smoothen its surface of any irregularities. Sometimes when the product is made in parts, it is first welded together and then sent for scraping and polishing. Metal shavings are re- used in the next melting.

Engraving- Engraving is the most refined and artistic of all the processes. The design that must be engraved is first sketched on paper and then scaled-up according to the size of the product. Measurement is an important aspect to make the pattern look harmonious and lyrical. These are mainly inspired from different forms of nature like trees, flowers, birds, and animals. The geometric ones have their influence from the Mughal architecture. First, an outline of the whole design is done with a fine engraving tool hammered with a wooden block. After that, broader tools are used to engrave the background and give depth to the pattern. These are often filled with colorful lac or enamel.

Polishing- Polishing mainly includes cleaning the brass ware with a soft scrub and then buffing it on the machine for golden sheen.

The district has domestic units as well as large industries engaged in the manufacture of metal goods. The work of washing, shaping and polishing handicraft metal items is carried out in the domestic units. 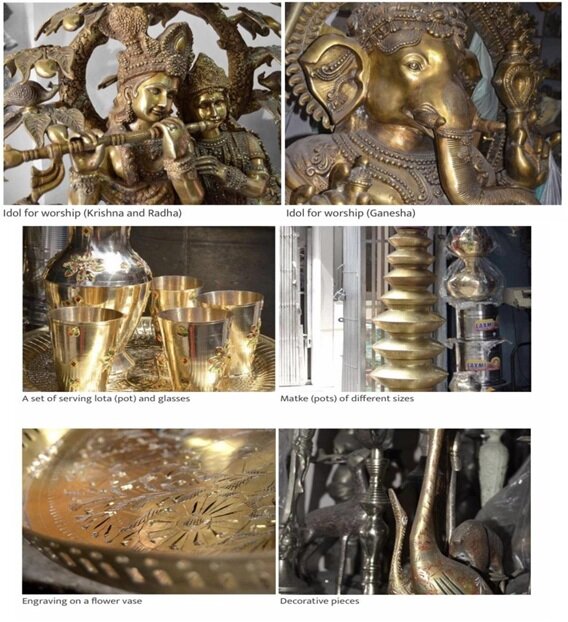 The designs made on the brass products here display culture, heritage, history and diversity. The patterns and designs used for decorating these items are inspired from a variety of sources, varying from Hindu Gods and Goddesses to paintings of the Mughal Era.

The items that are more popular of the art tradition of Moradabad artisans are flower vases, beautiful table taps, trays and candle stand. Items like ashtray, beer mug, tables, bookend etc. of considerable variety are also produced by the artisans.

Moradabad is renowned for brass work and has carved a niche for itself in the handicraft industry throughout the world. The brassware is exported to countries like the USA, Britain, Canada, Germany and to the Middle East and Asia. The Brassware Industry of Moradabad being an old traditional industry of the country earned international reputation to fulfil the needs and changing tastes of consumers over different periods. It is not only important from International point of view as a great foreign exchange earner, but it is more important from national point of view as the greatest source of employment and income to the local people. 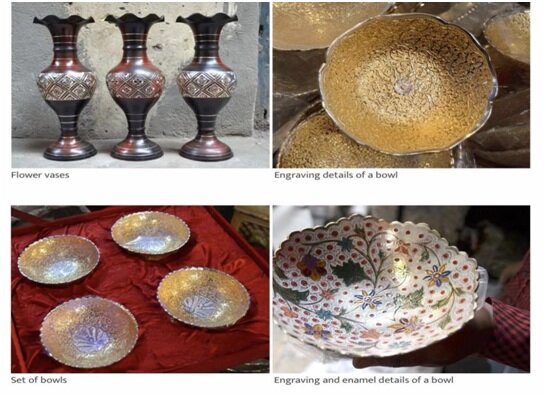