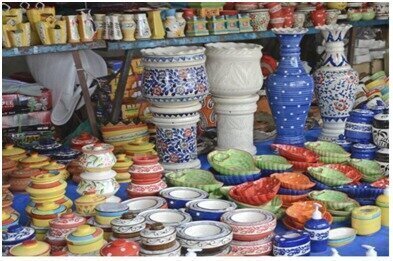 India, with its varied cultures and traditions, is home to several art forms that are either ethnic to the Indian land or have been brought to the country from different parts of the world. Especially, since the country had been colonized for long periods, people in different parts of the country took to these artworks which have now become synonymous to the places where it is still being practiced, and one such artwork that stems from Khurja.

Khurja pottery is traditional Indian pottery work manufactured in Khurja of the Bulandshahr district in Uttar Pradesh, India. Though it isa small city even then it is popularly known for its pottery making. It supplies a large portion of ceramics and pottery products used in the country. Therefore, it is also known as “Ceramic City”. The main occupation of khurja people is either they are owning a pottery industry, or they are working in those industries.

Khurja pottery has characteristic exotic painted floral patterns, in soothing shades of blue and brown, on an off-white background, which gives it an elegance and ancient charm. A thick slip is used to raise some motifs in relief, creating a three-dimensional visual feast. Over the years, the potters have also widened the array of colours to include warm orange and light red glazes, creating variety yet preserving the individuality of the art. Each piece is handcrafted to perfection with utmost care and precision. This pottery is known for its beautiful patterns and timeless appeal, making it a favourite among pottery enthusiasts and crockery collectors.

There are about 400 Khurja pottery factories in the town that have employed about 15,000 artisans as official and another 25,000 as unofficial employees.They produce several kinds of items such as crockery wares, art wares, electrical goods, sanitary wares, tiles, household items, etc.,

Apart from India, the pottery items manufactured in these units are sold in various other countries such as the USA, UK, New Zealand, UAE, and Australia.

Khurja pottery has been protected under the Geographical indication (GI) of the Agreement on Trade-Related Aspects of Intellectual Property Rights (TRIPS) agreement. It is listed at item 178 as "Khurja Pottery" of the GI Act 1999 of the Government of India with registration confirmed by the Controller General of Patents Designs and Trademarks.

Due to the various advantages nowadays, people have become inclined towards using pottery items. Foremost, Health benefits of clay pot cooking come from its ability to disperse steam throughout cooking. This provides huge moisture and helps to cook with less oil and gas. Since Clay is alkaline in nature when a meal is cooked it neutralizes the PH balance of the meal which makes food less acidic. The slow cooking process retains all the nutrients of the food that we cook in these pots.

POTTERY IN INDIAN HISTORY & EMERGENCE OF KHURJA AS ITS HUB:

Pottery is the oldest art and most enduring material known to mankind. It was believed that the pottery remains found from prehistoric sites in India belongs to the period of Neolithic Art (8000- 2500BCE) but later with the help of better dating techniques, it was discovered that potteries were made even in the Middle period of the Upper Paleolithic.

During that period, Pottery was one of the basic needs for primitive tribes in their daily life. Earlier, the pottery was made in the shapes of utensils used for cooking, bags of animal skin, baskets etc. These potteries were fired at low temperature.

The pottery culture didn’t end in primitive times rather it got flourished in all over the country and with the view of utilization, it got converted into a never-ending art. From stone age to vedic period, Magadha empire to Mauryan, Delhi Sultanate to Marathas and British Raj to present times, Pottery placed its importance in every era.

In Khurja, the art form that dates to more 600-700 years. Various folklore is attached to this splendid art form, one of which is that this form of pottery arrived in the city during a campaign of Taimur Lame, whereas another legend goes that the Mughals brought it to the land. However, the author of “Pottery-making Cultures and Indian Civilization” mentioned that “Khurja in Bulandshaher is one of the oldest centers for glazed pottery in India”. Further mentioned, “These potters often call themselves as Multani Kumhars suggesting that their origin was Multan”. The main turning point in Khurja’s status as the ceramic town came in 1940. Poddar tells a widely known story: During World War II, the British ordered a few ceramic loo seats for their soldiers in the battlefield. Final products turned out to be better than their expectations. The British realized the sleepy town’s pottery potential and decided to promote it as a ceramic hub. Whatever be the history, in today’s times, this creative activity has a great reputation throughout the world and provides the livelihood for several artisan groups.

Modern-day pottery manufacture flourished in the 1940s, and the Uttar Pradesh government set up a pottery factory in 1942. Later, the factory was closed in 1946–47 due to lack of quality. In 1952, the factory was changed as a Pottery Development Centre. From 1942 until now, some adoption, transformation, initiative was taken by various actors for the betterment of pottery manufacture that resulted in an important role of Khurja pottery in national level as well as export to foreign countries.

PROCESS OF TURNING A CLAY INTO PRODUCT:

Making Khurja pottery is a lengthy procedure, these lead-free pieces of art require raw material which is sourced from different parts of the country which then undergo stages of production before becoming one of these beautiful decor pieces that you bring home. When we say stages of production, it has also undergone a change in the manner that it used to be produced. From red clay pottery, the artisans moved on to blue glaze and then transitioned on to red clay articles with the engobe of white clay, painting floral designs.

Different types of tools and materials are used to make ceramic pottery. The main material used is clay. Two to three varieties of clay powder are mixed into one dough of clay. The Types of clay used are Quarts clay, Phosphate clay, Bikaner clay and China clay.

For molding ceramic articles, molds are prepared from POP as they absorb water and allow the article to obtain the shape.

To color the products oxide chemical colors are used obtained from Iron, Zinc, Cobalt or cobalt carbonate, Chromium Oxide, Iron Oxide, Nickel Oxide, etc. Chromium Oxide can yield a variety of colors: red, yellow, pink, brown, and especially green. Nickel Oxide is used to produce greys and browns. The colors are mixed with glaze solution and applied on the products which show its reaction while heating and bring out the required color.

Glaze solution is used to give and shine to the product. It adds a decorative dimension of color and texture on the finished products.

Kiln is used to bake the articles after making them.

Jigger and Jolly machine is used to make the small articles with the help of the mold.

Process of making a product goes through these stages:

Khurja pottery products are colorful, useful and add ethnicity elegant. The collection of soup bowls, vases, plates, and other cutlery items are available to make the dining experience all-the-more chic and classy, or have something worthy to be displayed on the table and enhance the beauty of their spaces. Every artisan has his/her area of expertise when it comes to pottery, and they stick to it. Speed is a crucial factor in the industry, which depends heavily on the dexterity of the hands. Ceramic products were generally made for cooking and groceries, but later creativity was added to the art which produced unique designs of artifacts and products made of ceramics. This made craftsmen open their minds for new designs and explore different ways to make them better with every production of their products.

The products range from everyday items such as crockery and planter pots to decorative miniatures and wind chimes. Besides decorative items and crockery, there are several utility items such as tiles, grinding balls, switches and sanitary ware.

There is sufficient domestic demand too, but the industry continues to be largely driven by exports.

The Khurja pottery craft fascinates not only because of the form but also, the texture of the craft items. The potter of Khurja also excels with the delights use of warm autumnal colors like orange, brown and a special light red. There are fine harmonious blends of colors which makes it pleasing to the eye. 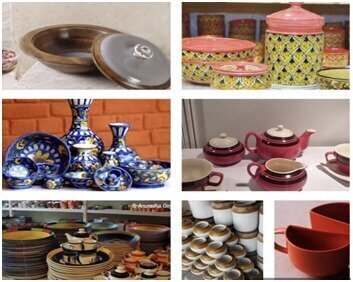 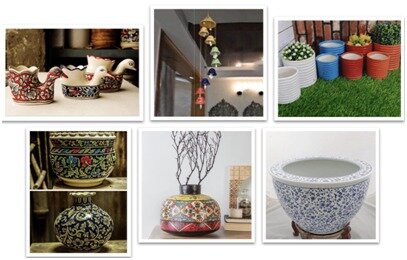 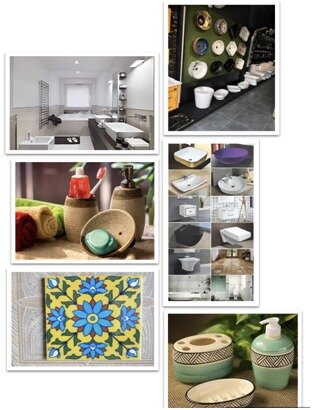 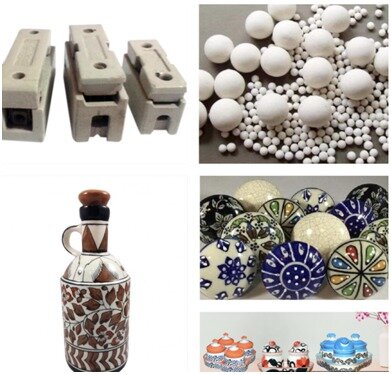 Khurja is one of the earliest centres for glazed pottery in India where potters have the monopoly of making highly artistic blue pottery. Today, the art form has been kept alive by passionate artisans who work relentlessly to produce these fine specimens of craftsmanship.

Khurja ceramics and pottery can now be spotted in different parts of the country, thanks to the convenience of transportation and the ease of a platform to sell, unlike earlier. But each of these pots goes through a process that requires an eye for detail and effortless strokes of the brush.

Modernization in the pottery industry has caused exports to rise, so the perfection of these artisans can reach the ends of the world. Professional designers are taking personal interest in renewing the art by giving design inputs to potters, thus expanding the scope of Khurja pottery, and adding a modern touch to ancient artistry.